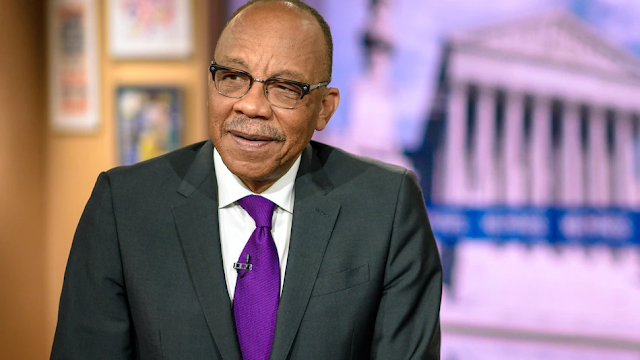 Speaking of Trump and the GOP legislators who have joined in an effort to question the integrity of the voting process, Robinson said:Here we are talking about the fundamental act of our democracy, which is accepting the results of a free and fair election and conducting the peaceful transfer of power from one faction to the other faction. That’s what was first done in 1801; it’s what’s been done ever since and that is really the fundamental act of our democracy. It’s the most important act. Without it you don’t have a democracy and you certainly are soiling and potentially shredding the Constitution.

But it’s all for political ambition; Hawley and Cruz and the rest of the dirty dozen — I guess there are 14 of them now — should live in eternal shame for what they’re doing because they’re damaging not just Democrats, they’re certainly, I hope, not improving their odds of ever becoming president. I think they should wear some sort of scarlet letter for the rest of their political careers because they’re harming the country.

Robinson, who won a 2009 Pulitzer Prize for his commentary on the 2008 presidential race, has had harsh words for Trump before, writing in August 2019, “The astonishing thing is that the president of the United States is, let’s face it, raving like a lunatic — and everyone just shrugs.”

Trump’s sales technique is not to convince but to overwhelm. And while he has practical, self-interested reasons for trying to cling to power — notably, four more years of effective immunity from any threat of criminal prosecution — on some level, he seems unable to deal with the reality of being an impeached, one-term president who was defeated despite the fact that other Republicans, overall, did quite well. In other words: a loser.

In December, Robinson targeted Trump over the COVID-19 pandemic, asserting:

President Trump’s shameful legacy will be the needless death and vast devastation of the covid-19 pandemic. …  The health and economic impacts of covid-19 were always going to be brutal, but Trump made everything much worse than it had to be. … The worst thing Trump did — and continues to do — is to treat the virus less like a threat to the nation and more like a danger to his own political and psychological well-being.

In reference to Trump taking credit for the speed with which vaccines were created, Robinson surmised that it would take Democrats to reassure the public on the necessity for the vaccines:

That messaging won’t reach anyone who is concerned that Trump has interfered with the process of developing and approving these vaccines; it’ll be up to figures such as Anthony S. Fauci, former president Barack Obama and incoming President and Vice President Joe Biden and Kamala D. Harris to allay their concerns. That’s still a lot of damage to undo, but Trump was always going to leave an enormous amount of wreckage behind him.