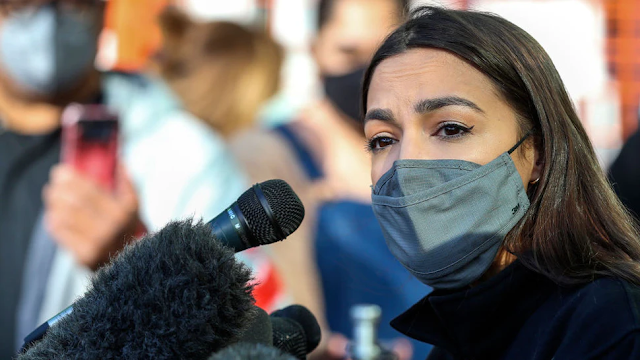 Ocasio-Cortez sounded off on the border crisis Tuesday on Instagram. The New York Democrat did not explicitly blame President Joe Biden for the surge of illegal migrants crossing the U.S. border, though migrants themselves cite the president and his policies as primary factors in their decision to travel to the U.S.“So let’s talk about this because so much of our national conversation, which is not a conversation, about immigration is driven by people who could not care less about immigrants. So often people want to say, ‘Why aren’t you talking about the border crisis?’ or ‘Why are you talking about it in this way?’” Ocasio-Cortez said.

“Well, we’re talking about it. They just don’t like how we’re talking about it because it’s not a border crisis, it’s an imperialism crisis. It’s a climate crisis. It’s a trade crisis. And also, it’s a carceral crisis because as I have already said even during this term and this president, our immigration system is based and designed on our carceral system,” she continued.

Ocasio-Cortez went on to blame the U.S. for causing a climate crisis that “disproportionally” impacts Latin America, forcing migrants to flee north from their home countries to avoid environmental disasters.

“Let’s talk about the climate crisis because the U.S. has disproportionately contributed to the total amount of emissions that is causing a planetary climate crisis right now, but who is bearing the brunt of that? Disproportionally, it’s actually not us,” Ocasio-Cortez said. “We help create the problem but disproportionally it’s the global south – it’s south Asia, it’s Latin America – that [is] going to be experiencing the floods, wildfires, and droughts in a disproportional way, which, ding, ding, ding, has already started a migration crisis but people don’t want to have that conversation.”

“Where is AOC?” Graham asked. “Why aren’t you at the border looking at the things being reported. If you were worried about children under Trump being in bad conditions, this is worse. If you’re worried about people having COVID outbreaks, this is the biggest COVID spreader in the entire country. So where are you?”

In 2019, Ocasio-Cortez accused the Trump administration of running “concentration camps” on the U.S. southern border, comparing the treatment of illegal immigrants in the U.S. to Jews in Nazi Germany.

“The United States is running concentration camps on our southern border and that is exactly what they are,” Ocasio-Cortez said in a June 2019 Instagram video. “I want to talk to the people that are concerned enough with humanity to say that we should not that ‘Never Again’ means something and that the fact that concentration camps are now an institutionalized practice in the home of the free is extraordinarily disturbing and we need to do something about it.”