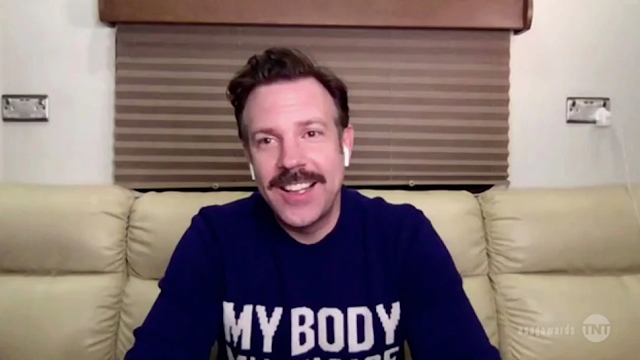 Former “Saturday Night Live” star Jason Sudeikis accepted the Screen Actors Guild Award for his performance in the acclaimed series “Ted Lasso” on Sunday night while wearing a sweater bearing the words, “My Body My Choice” – a phrase commonly used by abortion activists to justify the practice’s legality.

Despite the obvious political messaging on his sweater, Sudeikis made an apolitical speech and thanked the fellow nominees.

“Thank you to all of my fellow actors, male and female,” Sudeikis said. “That means a lot to me — it really, really does. It’s very, very flattering, very humbling.”

According to HuffPost, “viewers watching at home quickly identified the Sudeikis pullover as a Gucci sweater that goes for upwards of $1,000. The look almost immediately got social media buzzing with fans weighing in on the fashion choice.”

Sudeikis has previously engaged in pro-abortion activism along with his ex-partner, actress Olivia Wilde. In 2018, for instance, they attended a gala in support of Planned Parenthood. As Vogue reported at the time:Hollywood and the creative community united at the Marciano Art Foundation for the third biennial Sexy Beast Gala. Olivia Wilde, Jason Sudeikis, Ali Larter, and more came together for the evening, all in the name of Planned Parenthood.

There was plenty to do upon arrival. Between LCD’s pop-up boutique and the silent auction benefiting Planned Parenthood, art enthusiasts were busy. Surrounded by contemporary works, guests sampled food and drinks from coveted restaurants across Los Angeles; it was impossible to resist Jon & Vinny’s meatballs and McConnell’s churro ice cream.

But the centerpiece of the gala was the spectacular variety show hosted by comedian Kate Berlant with a musical performance by Moses Sumney and Kelsey Lu. All of the proceeds from the evening benefited Planned Parenthood Los Angeles, which offers reproductive care and empowerment without discrimination.

Throughout President Donald Trump’s tenure, Hollywood’s abortion messaging was pushed to record levels, according to a report from the New York Times in 2019.

“So far, halfway through the year, nearly two dozen characters in streaming shows, movies and television have had or talked about having abortions, many unapologetically, a development that would have been unthinkable a decade ago — and one that has angered some abortion foes,” reports the outlet.“In the pilot for ‘Shrill,’ Abby, the single millennial played by Aidy Bryant, professes to feel ‘powerful’ after having terminated her unplanned pregnancy,” the report continued. “On one of the final episodes of ‘Veep,’ Anna Chlumsky’s pregnant political aide lays into abortion opponents protesting outside a clinic, hollering, ‘I even prayed a little, and here I am.’ On ‘She’s Gotta Have It,’ the ambitious Clorinda, played by Margot Bingham, defends her decision to the baby’s father, saying anything she does with her body is her choice. Nine of the 11 people credited with writing those episodes were women.”